From The Strathclyde Business School Blog

The belief that the idea is important becomes invalidated when you work with successful entrepreneurs and begin to see a common pattern emerge: how an original idea morphs and evolves over time as the team does primary market research and starts to focus on customer needs, rather than their initial eureka moment. This observation is borne out in recent research by Professor Matt Marx of MIT, summarized in “Shooting for Startup Success? Take a Detour,” showing that for successful entrepreneurs, the idea they originally started out with is rarely the same as what they ended up succeeding with. 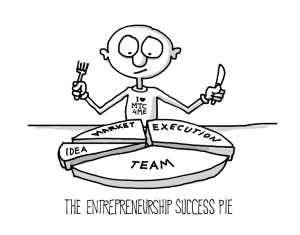 The idea of a better search engine wasn’t novel before Google got started; its value creation was all in the high-quality execution.  Similarly, the concept of an electric car was not new when Elon Musk started Tesla, yet it has experienced unprecedented success while others before and since have failed.  Likewise for the smartphone and Apple.

I know in my companies, we ended up at much different places than where we thought we would.  With one, SensAble Technologies, we thought we were going to be a medical simulation company and we ended up an industrial design company.   Another highly visible MIT company, E*Ink, started out focused on digital ink screens for retail outlets, then shifted to low-power cell phone screens, then finally found success with e-readers like Kindle – and now the broad-based market of electronic paper displays.  Time and time again, success is not based on the original idea but rather on disciplined execution and the quality of the founding team.

In fact, it is dangerous to become too attached to the original idea and not to the needs and wants of the customer.  Too often, the result is that entrepreneurs feel they need to be in “stealth mode” so they can build out their idea before someone can “steal” it.

If you have fundamental intellectual property, this strategy is recommended until you have a chance to patent the key elements of your breakthrough. However, it is then essential to get out and talk with customers, lest you end up like Dean Kamen, who holed up in New Hampshire with his stealth project code-named “Ginger, which also became known as “It.”  Enormous hype was built up around “It.”  The product, the Segway, finally came out, and as the lackluster consumer adoption demonstrated, “It” would have benefited from a lot more open vetting of the idea and a lot less stealth.

As former student Andy Campanella tells students in our introductory entrepreneurship class at MIT, “If you meet someone in a coffee shop and they can steal your idea and beat you with another company based on your idea from a 15-minute conversation, then you deserve to lose and you did not have very much to begin with.” Or as Dharmesh Shah says, “stealthy is unhealthy.”

In my book, Disciplined Entrepreneurship, I give a framework for a methodical approach to startups that can help guide entrepreneurs through the process of iterating on their ideas, and I look forward to working with students at Strathclyde in the near future on this topic.  But to really dive into how to build a strong team and the importance of a unifying culture, I recommend Harvard Business School Professor Noam Wasserman’s seminal book The Founder’s Dilemmas and I would also steer you to a popular article I wrote in TechCrunch titled “Culture Eats Strategy for Breakfast.”

So the next time you listen to an entrepreneur get overly excited about their breakthrough idea, wink at them and tell them that while they need an idea to get started, their focus should be on people and process because in the end, because in the end, they are what will  determine success.

Read the full post on The Strathclyde Business School Blog.

Bill Aulet is the managing director of the Martin Trust Center for MIT Entrepreneurship at MIT and also a senior lecturer at the MIT Sloan School of Management.