Weak inflation is one of the “major challenges” of our time, according to Federal Reserve Chairman Jerome Powell. Not only does persistently low inflation limit the scope of monetary policy, it may also have a damaging impact on the financial system. But the inflation forecasts used by the Federal Reserve to set monetary policy have not been performing very well lately. When the global financial crisis erupted in 2008 and growth collapsed around the world, why did inflation not fall further? As growth has picked up in the United States and unemployment has gone down, why has the inflation rate in this country remained so stubbornly low?

One key to the puzzle may be the forecasts themselves. The frameworks that macroeconomists have relied on to predict inflation primarily use domestic variables dating back to the “Phillips Curve” of the late 1960s which showed that inflation increases when unemployment falls. But the forces that drive our economy are not only confined within our national borders. The models miss what is happening across the rest of the world.

END_OF_DOCUMENT_TOKEN_TO_BE_REPLACED

Christos Makridis, digital fellow at the MIT Sloan Initiative on the Digital Economy

The recent spotlight on homelessness and poverty in Baltimore, Los Angeles and other major cities highlights a growing challenge in urban America: the rising cost of living.

The economy is booming by nearly all accounts. Year-to-year real GDP growth has been at least 2 percent since President Trump was elected, the unemployment rate is at its lowest point since 1969 and year-to-year nominal wages are growing faster than they have since the 2008-09 Great Recession. But a handful of metropolitan areas are experiencing growing rates of homelessness and labor market exits.

For example, California’s population growth in 2018 was the slowest in recorded history. And, while the overall number of homeless people is at its lowest point since 2007, according to the latest statistics from the U.S. Department of Housing and Urban Development (HUD), the number of unsheltered people has grown from 175,399 in 2014 to 194,467 in 2018.

END_OF_DOCUMENT_TOKEN_TO_BE_REPLACED

Anita Erskine has lived the dream of every young person sweeping stages, copying scripts, or fetching coffee at a studio. She was a lowly intern on a talk show, “The Bold & The Beautiful,” when the host of the live show called out sick. Erskine was dressed for a day behind the scenes, not her TV debut, but before she knew it, she was sitting in the host chair thinking to herself, “This lady is never coming back.” And thus, at 18, Anita Erskine started her career in front of the camera.

This story may seem fantastical to the reader, but after spending just a few hours with Erskine is becomes believable. She puts in the time to do the hard work and has a natural aptitude for building a personal brand.

Now, back in Ghana, she’s focused on something bigger than her personal brand. She is focused on using the media to promote the African brand and is doing it in a real and nuanced way. The two prevailing attitudes towards Africa’s brand are nicely portrayed by two editions of The Economist. The May 2000 edition included an article titled Hopeless Africa which cites flood, famine, and war summing up its laundry list of ills with, “No one can blame Africans for the weather, but most of the continent’s shortcomings owe less to acts of God than to acts of man.” Ten years later, we had The Hopeful Continent: Africa Rising which described the continent as being, “home to millions of highly motivated entrepreneurs and increasingly prosperous consumers.”

END_OF_DOCUMENT_TOKEN_TO_BE_REPLACED 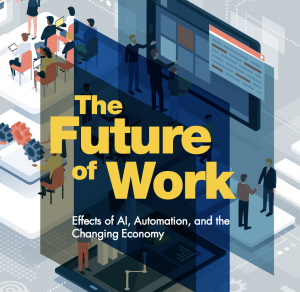 The digital age is impacting all aspects of life, including the future of work. Technological innovations have the potential to transform the workplace and enhance productivity, but it will take proactive and thoughtful discussion to harness these innovations for social benefit.

To explore this further, MIT Sloan Experts is hosting the #MITSloanBrazil Twitter chat on August 21 at 9 a.m. ET (10 a.m. São Paulo) to discuss the topics and themes of the upcoming Future of Work Conference in Brazil.

The conference, which will bring together leading experts from business and academia, aims to highlight the ways in which artificial intelligence, automation and the changing economy are affecting the future of work. This issue is crucial in Brazil, where 12 percent of the country’s workforce is unemployed.

The Twitter chat on August 21 will be hosted by Gabriel Azevedo (@gabrielazevedo), Professor of Constitutional Law, Head of Institutional Relations & Public Policy at Jusbrasil and Councilman in Belo Horizonte. He will be asking questions about the Future of Work and the upcoming conference to Lee Ullmann (@MITSloanLatAm), Director of the MIT Sloan Latin America Office, Jason Jackson (@JasonBJackson), Assistant Professor of Political Economy and Urban Planning at MIT, and Fernando Shayer (@CaminoEducation), CEO of Camino Education.

Join us on Twitter on August 21 at 9 a.m. ET (10 a.m. São Paulo) and follow along using the hashtag #MITSloanBrazil. Your comments and questions are encouraged! Simply include #MITSloanBrazil in your Tweets.

Over the past few years, world politics have been governed by a backlash against globalization. From the Brexit mess in Britain to restrictive immigration policies and tariffs in the United States and elsewhere, global economic integration is under assault.

But such integration offers many benefits: a greater variety of less expensive goods, greater opportunities for travel and cultural exchange, a more cosmopolitan world. In this climate, nongovernmental entities may be crucial to preserving them.

Thankfully, engineers have spent the past century building just such international bodies, because they believed that economic integration must remain above politics. These organizations have long set voluntary standards to ensure integration even when the political winds blow against them. This conception of global business standards will be crucial in the years to come as we struggle to preserve the benefits of cohesive systems for international trade, even as politicians battle over how interconnected they want to be.

It is ironic that the British should find themselves in the Brexit mess, because it was British engineers who created the first of the national standards bodies. Their project, a forerunner of today’s British Standards Institution (BSI), was a product of the expansive British Empire. It was founded in 1901 to ensure that industrial products and transportation networks within the United Kingdom and across its empire would be compatible with one another. Although some government representatives were included in its processes, the engineers leading the effort believed such standards should be voluntary, not government-mandated.